Following Hamid Sardar, Harvard scholar of Inner Asian Studies and professional photographer, we embark on a memorable journey into the culture of Kazakh eagle hunters in Mongolia’s Altai foothills. Exploration photography is not just about capturing beautiful portraits and breath-taking landscapes; it’s about uncovering the DNA of a land and its people and letting it become the guiding principle in our art.

In Kazakh culture, art and indeed memory itself, is inconceivable without this totem-like connection to the fabulous eagle that seem to tap into early layers of human consciousness and the religious experiences of the archaic hunter. For nomads who still live in the wild, survival is based on imitation of wild beasts such as the eagle. Man hunts, heals and moves through nature by emulating the intelligence of animals. This spiritual connection between man and animal will be the guiding theme of our workshop. 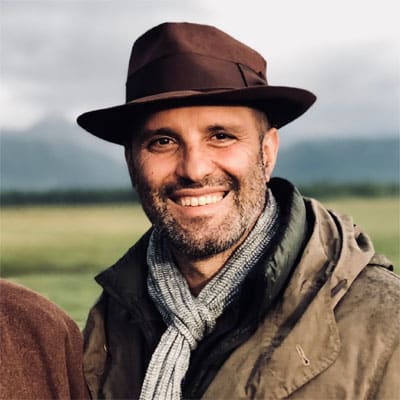 Renowned photographer, documentarist and scholar, Hamid Sardar, has a Ph.d. in Inner Asian Studies from Harvard University. Hamid is therefore uniquely qualified to introduce the often reclusive and enigmatic cultures of Mongolia. His work has been featured in National Geographic, Le Figaro and Paris Match, and he has produced several internationally acclaimed documentaries about the nomads of Mongolia.

For years, award-winning film maker and Harvard scholar Hamid Sardar has traveled Mongolia extensively, meeting and living with nomads to learn about their intriguing way of life. In his webinar, he will share photos and stories from his encounters with the famous eagle hunters, wise shamans, horse whisperers, traditional wrestlers and many more.

For logistical reasons, we suggest you fly into Ulaanbaatar one day early, as we will leave for Hovd on the first day of the workshop. This also allows you to get accustomed to the local time zone and climate.

We will organize a hotel for you in Ulaanbaatar at the raw price.

Settle into the hotel and spend the day exploring the Mongolian capital. In the evening, there will be an orientation dinner at the hotel to meet your workshop guide and the other guests, followed by a slide show and discussion.

Please note that this is the last chance to stock up on supplies you may have forgotten back home.

Today, we will fly to Hovd City, where we will be picked up by a 4×4 mini van that will take us to the camp. Here, you will have time to wander around and take the first photographs of the rolling steppe, home to one of the most cheerful and hospitable cultures of Central Asia.

In the evening, we will have dinner together and sleep in a traditional yurt, or ger as it is called in Mongolia, which literally means home.

DAY 2: IMMERSE YOURSELF IN THE NOMAD FAMILY LIFE

We will start the day early and drive to the camp of a Nomad family. You will get introduced to the traditional way of life, which hasn’t changed for centuries. Have your camera ready, as we will immerse ourselves in the family’s life and document their daily chores which include milking, herding, cooking traditional meals and preparing local dairy products. You will also have the opportunity to capture the nomads riding their horses and motorcycles.

We will have dinner at the camp followed by a peer review and discussion of the shots taken during the day.

Make sure your camera batteries are charged, as the best of what Mongolia has to offer will come to our camp: a mini Naadam celebration will take place at the camp grounds. Nadaam is Mongolia’s national festival and a sophisticated and eloquent expression of its nomadic culture.

The Mongolian hinterland has much more photo subjects to offer than the Eagle Hunters. Today, we will meet wrestlers and archers, horse racers, throat singers, and contortionists. In fact, in Mongolia, contortion is a cultural practice, which expresses itself through dance, and it is as common as ballet is to the Western world. Mongolia has produced some of the most magnificent contortion acts in the world, thanks to their grace and poise that exhibit the beauty and capability of the human body. Each single movement between the various poses is fluid in finely tuned positions all the way to the fingers and tiptoes.

Wrestling, along with horseback riding and archery, is one of Mongolia’s three manly sports. The sport known as Bökh is a cultural tradition that dates back centuries. It is the main focus in the life of many young Mongolian men, as it defines manliness within the community.

In the evening, we will have dinner at the camp and recap this exciting day with a photo review and discussion. For the night, we will stay in a yurt/ger at the camp. 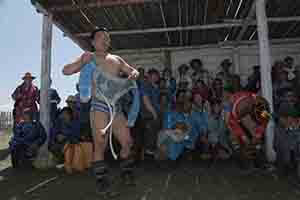 DAY 4: IN SEARCH OF THE ELUSIVE SNOW LEOPARD

We will start the day early and drive to Jargalant Mountain, which crowns a teardrop-shaped massif encircled by lakes. Snow leopards, gazelles and ibex roam this extraordinary ecosphere. The elusive snow leopard is a rare sight, so cross your fingers that we are part of the lucky few who get to see it.

Bring your long lens and be ready to hike the mountain to take some memorable landscape and wildlife pictures. Our guide, a local herder, will take us through his backyard, the majestic Jargalant Mountain, and to the places where we are most likely to see wildlife.

In the evening, we will return to Hovd, where we will have dinner at the hotel and review the images taken during the day. 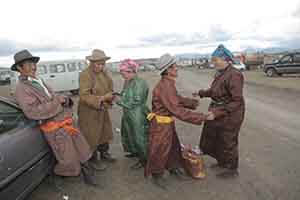 DAY 5: ON THE (DIRT) ROAD TO BAYAN-ULGII

Today, we have a long drive ahead of us, as the Bayan-Ulgii Province in the north is our next destination. Bayan-Ulgii is a far-off land of high mountains, (the Mongol Altai), torrents and glaciers. It is inhabited by Kazakh, a minority with a different culture from the Mongols, herding yaks and goats and hunting with trained eagles.

Along there way, there will be a stop for lunch as well as several stops for landscape and travel photography.

Dinner at base camp followed by evening peer review and discussion.
Once more, we will spend the night in a yurt/ger. The Kazaks decorate their tents and houses with bright weavings and abstract patterns that imitate ram’s horns, birds and flowers. The inner life of the Kazak, it seems, flourishes in inverse proportion to the scarcity of their geographic environment.

DAY 6: ALTANTSOGTS – WHERE THE EAGLES FLY

We will leave the camp early and drive to Altantsogts to experience the Kazakh eagle hunting culture.

During our visits to the nomad camps, we will observe many methods of catching an eagle. Most commonly, the Kazakhs will lure the eagle into a net trap using as decoy a bait-crow tied near a dead animal. After heavy rain, eagles will sometimes become so wet that they cannot not fly easily. The same thing happens when an eagle gorges itself on carrion, making it possible for a man on a fast horse to capture the bird before it takes to the air. Kazakhs insist, however, that the bravest eagles, those that are trained for catching wolves, must be directly taken from the nest right before their maiden flight.

Our goal is to capture how local herders train and hunt with their eagles in the vast mountain area of the Altai Mountains. We will observe hunters training and feeding their eagles. Short training flights will allow us to set up the camera in various creative positions in order to capture the eagle in flight.

However, the Kazakhs understand that eagles are still wild animals that cannot be kept forever, and so they must be returned to the wild before they lose their dreams of freedom. We will follow a hunter to the highest point on the mountain and photograph the elaborate ritual of releasing the eagle back into the wild. Participants will be encouraged to capture the complicity and emotion between eagle and hunter.

Dinner at the base camp followed by evening peer review and discussion. Sleep in a yurt/ger at the camp.

Today, we will travel to the hidden gem of Khatuu Mountain and visit the eagle hunters and their families. This area of Western Mongolia will leave you speechless with amazement by its rough hills and deep cut gorges of the majestic valley of Khatuu.

The day will be spent photographing the egale hunters, while you will also have the opportunity for landscape photography.

Dinner at base camp followed by evening peer review and discussion. Overnight in a yurt/ger.

On our last day at the camp, we will witness and capture Kazakh traditional games and culture: experience the famous ancient nomadic game known as kokpar, which can roughly be transplated to “goat-grabbing”. An accurate description, as riders try to take away a goat from each other. The game is said to have originated with Genghis Khan’s early-13th-century mounted raiders, although it may be even older.

We will also listen to Kazakh songs and dombor music. The dombor (with two strings, a long neck and round belly) is an instrument traditionally played by Khazakh musicians.

Dinner at the camp followed by a review and critic of the images taken during the day. Night at a yurt/ger.

DAY 9: FLIGHT BACK TO ULAANBAATAR

Today, we will return to the Mongolian capital. In the evening, we will have dinner at our hotel followed by individual presentations and discussions.

Enjoy Your 42-Page Catalog with stunning photos from Mongolia 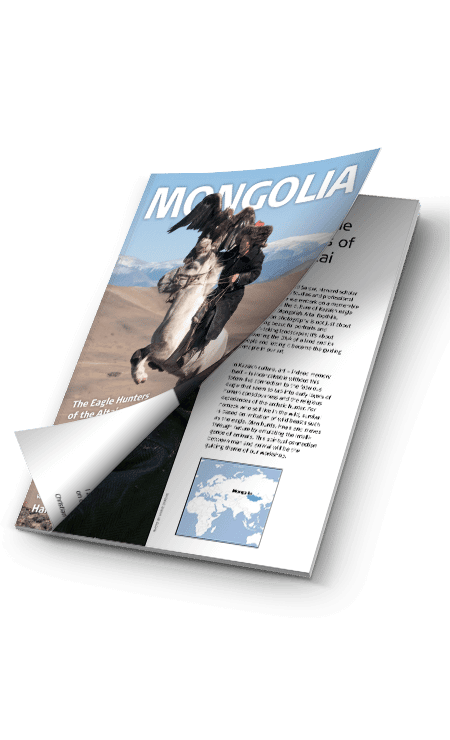 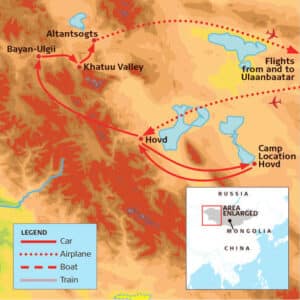 The airport is due for replacement in 2019 by the new Khöshigt Valley Airport, located at the Khoshigt Valley, 52 km south of Ulaanbaatar city centre.

There are international flights arriving from Seoul, Hongkong, Berlin, Istanbul, Tokyo and Moscow.

A 30-day tourist visa is required for most countries and can be easily obtained at any Mongolian embassy, consulate, consulate-general or honorary consul. However, a number of countries can visit visa free, including citizens of the USA, Canada and Germany.

If you are traveling to Mongolia from a country that has no Mongolian consulate, you can pick up a 30-day tourist visa on arrival at the airport in Ulaanbaatar. You will need T108,000 (or dollar equivalent) and two passport photos – you should also have a pre-approval letter from an organization or company in Mongolia.

Expect warm and mostly dry weather in June and July, with some thunderstorms.

The official language of Mongolia is Mongolian, and is spoken by 95% of the population.
Russian is the most frequently spoken foreign language in Mongolia, followed by English, although English has been gradually replacing Russian as the second language. Korean has gained popularity as tens of thousands of Mongolians work in South Korea.

The Mongolian monetary unit is the Tögrög (MNT)