Siena’s entire year revolves around these races. Young drummers prepare and practice their rhythms, flag bearers rehearse all around the city, the leaders of each contrada barter throughout the year to get the best jockeys and the best horses. It is an experience unlike any other, with passion, rivalry and history, giving you a unique chance to make a photographic story about an authentic moment in time. 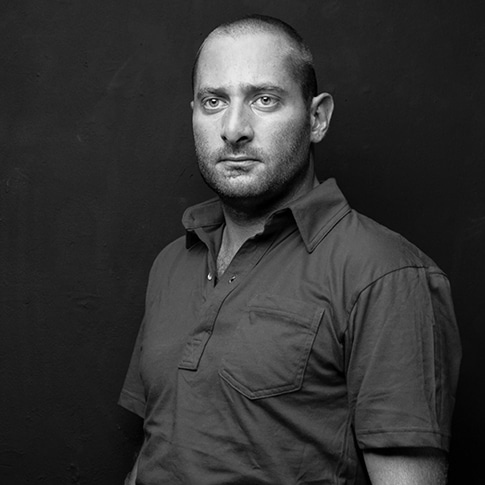 Marco Di Lauro is a World Press Photo Award-winner working for, among others, Newsweek, Time Magazine, New York Times Magazine and Der Spiegel. He has worked under an exclusive contract for Getty Images Reportage since 2002, covering the Middle Eastern conflict in the Gaza Strip, and spent almost all of 2003 and 2004 in Iraq, documenting the American invasion and the plight of the Iraqi people.
Along with his wartime coverage, Di Lauro also covers events such as the Palio of Siena Horse Race and the Battle of the Oranges that breaks out every year in the city of Ivrea in Italy, Easter processions in Sicily, the Easter procession in Seville, and the religious life in Italy and the Vatican City.
In his stories, whether large or small, in Italy or abroad, he always attempts to capture the sacred side of life and its deeper meaning.

WEBINAR: HOW TO DO REPORTAGE PHOTOGRAPHY & OUR SIENA WORKSHOP

In his webinar, World Press Photo Award winner Marco Di Lauro talks about his life dedicated to reportage photography and explains more about Il Palio Di Siena and our 2022 workshop. 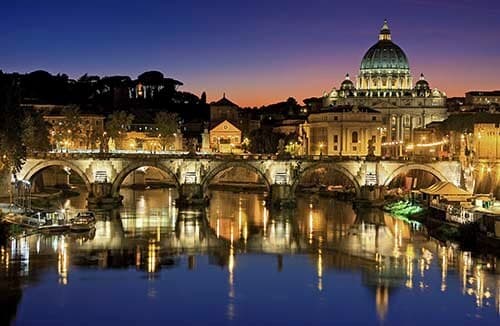 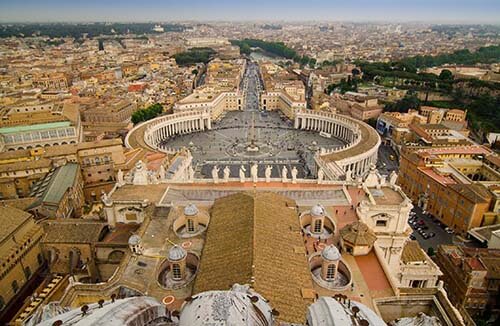 The workshop starts today at 18:00. You will meet workshop leader Marco Di Lauro and the other guests for a delicious welcoming dinner. Afterwards, Marco will hold a presentation about Rome and Siena and explain more about the coming days and the workshop in general. In preparation of the next day, Marco will talk about street photography and how to approach people in a natural way. 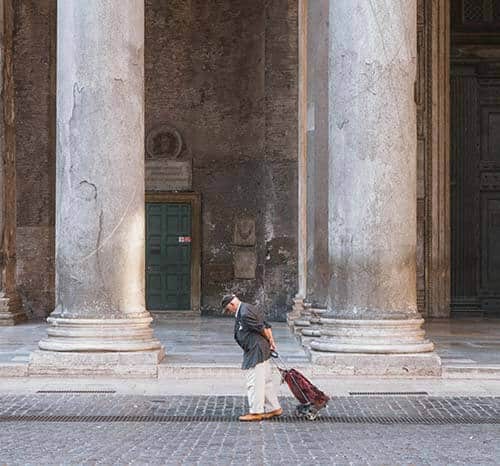 Morning workshop in the streets of Rome with Marco Di Lauro. We will wander the streets of Italy’s beautiful capital, looking for candid shots and unique architecture. The ancient streets and buildings provide excellent surroundings for street photography and for documenting the life of the locals.

In the evening, we will meet for dinner and review the images you have taken during the day and discuss.

Marco Di Lauro will hold a presentation about reportage photography using the most iconic images he has taken throughout his career as an example. 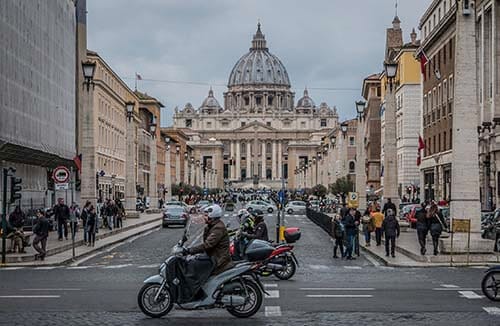 Today we will take the train to travel from Rome to Siena. The train ride is a perfect way to relax before the exciting days ahead. Enjoy the Italian landscape flying by as Northern Tuscany is one of Italy’s most magnificent regions.

After arrival, we will settle in at the hotel. There will be time to explore Siena, which is a UNESCO World Heritage site with architectural treasures such as the Siena Cathedral and the Piazza del Campo.

In the evening, we will have dinner together at the hotel. Afterwards, Marco will share more of his images from previous Palio di Siena and explain how to get great images out of the event. 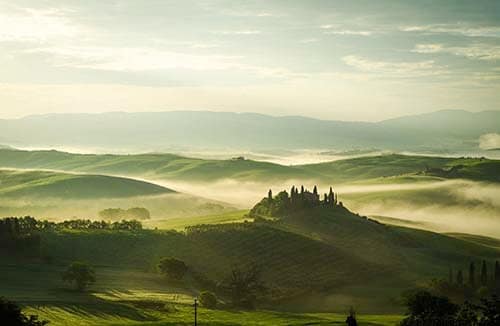 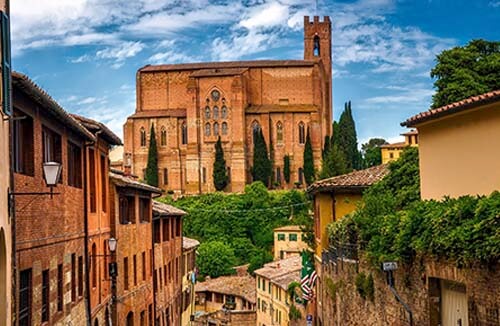 Today, we are going to photograph the trials (tratta). It is a process by which the horses are matched to the ten Contrade that will participate in the Il Palio. The horses, after having been examined by veterinarians and deemed to be in ideal condition, are divided into groups of 5-7 horses for ”batterie”, or trials, and then allowed to run around the dirt (tufo) track three times to determine if they are suitable to run on this type of track. At the end of the trials, the Captains of the Contrade, in the presence of the Mayor, get together to choose the 10 most suitable horses.

After an eventful day, we will meet for dinner in the evening and Marco will provide feedback on the photos that you have taken during the day. 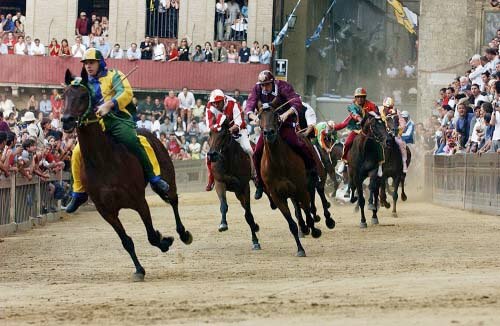 We spend the day experiencing and photographing the second and third trial run: The Jockeys ride their horses during one of the six trials. The city’s 17 separate Contrade or neighborhoods compete in the prestigious Il Palio race.There is also time to explore how the festival revolves around Siena.

In the evening, Marco will go through the photos taken during the day and hold another lecture on reportage and documentary photography.

This day offers a lot of adventure and great scenes. We will explore the the final rehearsal and final rehearsal dinner with our camera. The grand dinner, depending on the size of the contrada, have seats ranging anywhere from 900 to 3500 people, who all eat, sing and drink lots of wine, with the favourite topic of conversation being the chances of the contradas in the race the following day.

Tomorrow will be the main event of Il Palio di Siena, so Marco will prepare you in the best way possible to make sure you’ll be able to take amazing photos and capture the excitement and emotions of the spectators and jockeys. 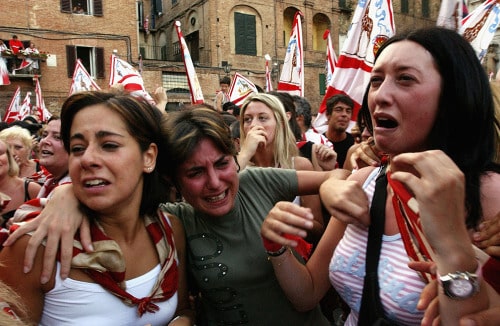 We will get early up in the morning on the day of the main event to photograph the exciting moments and the spectacular horse race Il Palio.
7.45 a.m. – In the Chapel adjacent to the City Hall, the Archbishop celebrates the ”Jockey Mass.”
3 p.m. – Blessing of the horse and the jockey in each Contrada’s parish church. The priest ends the mystical rite with a wish that sounds like an order: ”Go and come back victorious!”
Around 3 p.m., each Contrada performs a benediction ceremony of its horse and afterwards joins in the large parade in historical costume, with over 600 participants, that winds through the city.
The parade arrives around 5 p.m. at the Piazza del Campo, and ends by around 6.30-7 p.m. The Piazza del Campo is completely packed with local spectators and tourists. The event is scheduled to begin around 7 p.m., but the actual start can be delayed by the preparations.
The race takes only 75 seconds. It is fast and dangerous for the jockeys and the horses. At the end, the winning Contrada is presented with the Palio banner which represents a great honor. The winning Contrada then marches through town with the banner.

DAY 8: RETURN  TO ROME AND DEPARTURE
Time to say goodbye. Today we all return to Rome to catch our flights back home. 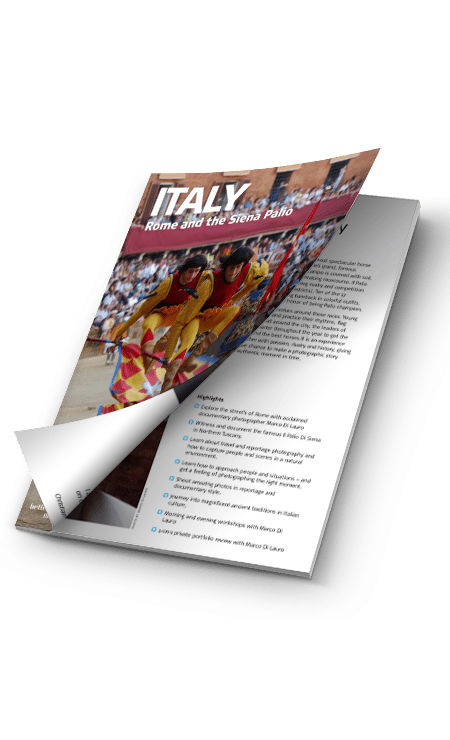 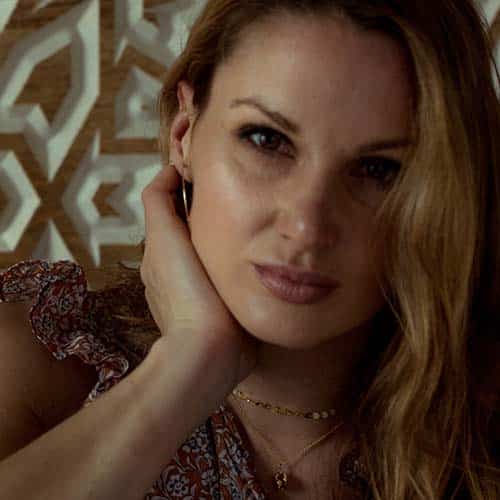 “My workshop with Marco Di Lauro photographing the Palio di Siena actually changed my life. I attended as an amateur photographer, secretly hoping I might learn enough to become professional one day. The time I spent learning with Marco surpassed all my expectations.
Marco approached it like we were on an actual news assignment. It was a baptism of fire and I went from day 1 of not even thinking to charge my camera batteries for the next day to ending the trip with Marco telling me I was a born photojournalist. His teaching was inspiring, demanding and opened my eyes to the possibilities of where hard work, passion and commitment could get me. I’ve since become a portrait photographer (I’ve a young family, so although I did undertake some incredible photojournalism adventures since my time with Better Moments, becoming a portrait photographer is a perfect balance of working under pressure and meeting diverse and interesting people).
Genuinely, I can’t thank Marco enough for his time, patience and dedication in getting the best out of us as a group and as individuals. I still think of the lessons he taught me in my work today.”

Lucy Mohr, from the UK, participated in our Italy workshop with Marco Di Lauro 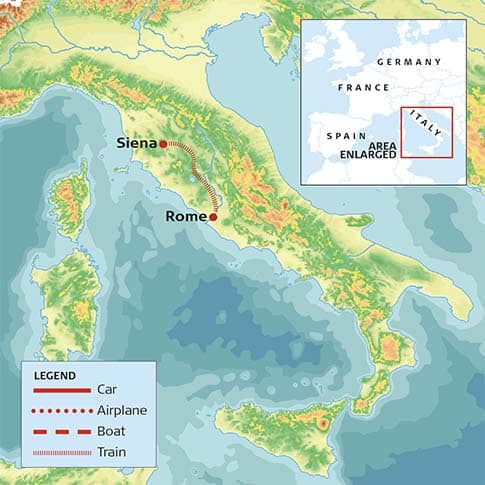 All EU / EEA nationals will only need to present an identification document to enter Italy.
If you are a non-EU/EEA traveller wishing to visit Italy, San Marino or the Vatican, you will need to present a valid passort valid for at least three months beyond the planned date of Exit and, if you are subject to the Italian visa regime, a valid visa. Depending on the country of origin, you may need to present further documents. For more information, please check the page of the Ministery of Foreign Affairs.

Siena weather is characterised by an excellent temperate climate, with weather that is mild through most of the year and generally avoids the worst extremes of hot or cold that can be found elsewhere in Italy. Siena has four seasons: spring (March to May), summer (June to September), autumn (October to November) and winter (December to February). Summertime in Siena rarely gets as hot and sticky as other parts of the country, peaking around 31°C.

Italian is the official language of Italy. In touristy areas, Italians speak at least basic English.