The first time I visited Asia was with a backpack, taking the concept “travel light” literally: all I had with me was a pair of swimming trunks, one T-shirt, a toothbrush, my Nikon and the rest was Kodachrome 64 films.

Since then, I have traveled all over Asia, always with a strong passion for the people I met along the way and their attitude towards life. No matter what issues I encountered, they were smiling and their response was – “no problem”. Another reason why I love Asia, and this is quite an important one, is that Asia is such a rewarding and enthralling part of the world to explore as a photographer. There is a myriad of strong photogenic faces, fascinating people as well as exotic landscapes – what more could you ask for!

This Better Moments Indochina photography workshop is based on the concept of traveling in a small, intimate group of passionate photographers. You will have all the time in the world to take the images you are looking for, while, at the the same time, get a maximum of mentoring. We will have the opportunity to work in pairs so that I can guide and support you throughout the photographic process. Traveling in a small group will also allow me to share my experience and knowledge.

There are other benefits as well. We are more flexible, can move faster, improvise, and explore cities and other environments that we wouldn’t visit with a bigger group. We will cover some of the distance by boat and sail along the Mekong River to experience its many faces. This form of travel is becoming extinct as travelers today want to travel fast and/or on large – and in my opinion violent – cruise ships. Instead, we will embark on a rustic and simple river pond like it as has been custom for centuries.

The trip is divided into three main segments – Thailand, Laos, and Cambodia.

Thailand: we will feel the pulse of the capital Bangkok and the northern part of Thailand. A corner of Thailand that is not yet overwhelmed by tourists.

Laos: Luang Prabang, which is the capital of Luang Prabang Province in northern Laos, and which served as the royal capital of Laos until 1975. Here, we will meet the local people, and explore their culture as well as the lush nature around the city.

Cambodia: I first visited Angkor Wat 25 years ago. I was amazed and overwhelmed by the culture and the historical ruins. Even 25 years later, I still get goosebumps when I see the sun rise over the ruins of Angkor Wat.

In Cambodia’s capital, Phnom Penh, we will learn about one of the most cruel stories of the countrie’s past – the sad story about The Killing Fields. There, collectively more than a million people were killed and buried by the Khmer Rouge regime during its rule of the country from 1975 to 1979. However, Phnom Penh is also an important and beautiful story as the capital is proof that you can put the past behind you, and instead become one of Asia’s shining stars.

In other words, I want to share a small historical corner of our mighty globe saturated with culture, nature and unique people with you. 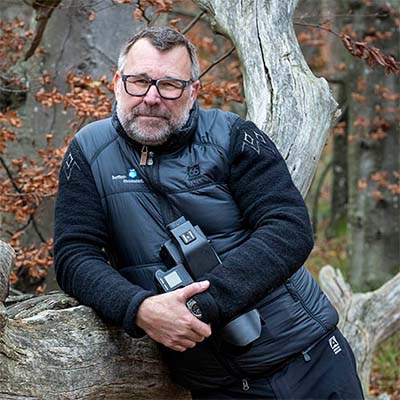 Christian Nørgaard is the founder and CEO of Better Moments. For years he has photographed and traveled extensively in Asia and has received wide acclaim for his unique photographic talent. In recent years he has also collaborated with Steve McCurry and other National Geographic’s leading photographers for exhibitions and events. His workshop in Indochina is a unique opportunity for any photographer to combine adventure, travel, street, portrait, and landscape photography and to work with one of the best in the field.

Throughout this workshop, there will be regular 1-on-1 teaching and mentoring as well as evening presentations by Christian Nørgaard. We will hold workshops in post production and editing, and discuss your images on a daily basis. Whenever possible, Christian will hold improvised lectures. Therefore, there won’t be a fixed schedule for this workshop, instead we will decide on a day-to-day basis and whenever the opportunity arises. Traveling in a small group allows us to be flexible and attend to everyone’s questions and needs.

We will meet in Thailand’s capital Bangkok, where you will get introduced to your travel companions. Christian Nørgaard will talk you through the itinerary and give an outline of what will happen in the upcoming days.

Note: To ensure that you are acquainted with the local time and tropical climate, I suggest you travel in a day or two before the start of the workshop.If you arrive one day earlier, you can use the day to relax or explore Bangkok, the capital of Thailand. If you wish, Better Moments can help you with booking a hotel and local excursions. 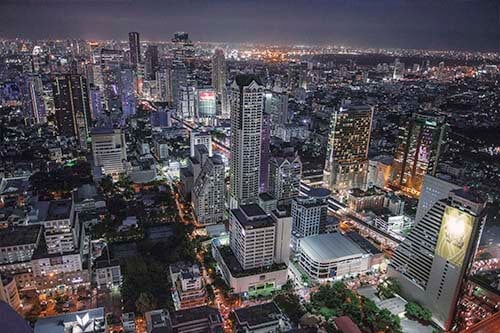 Morning flights to Chian Rai and transfer to our hotel.
Chiang Rai is the capital of the Chiang Rai Province, which is located in northern Thailand. It is close to the borders to Myanmar and Laos.

Our first on-location photo session will take us to the enchanted temple of Wat Rong Khun. The temple is more kitsch than pretty and historical – a bit like the Sagrada Familia in Barcelona. The unfinished work of one man. 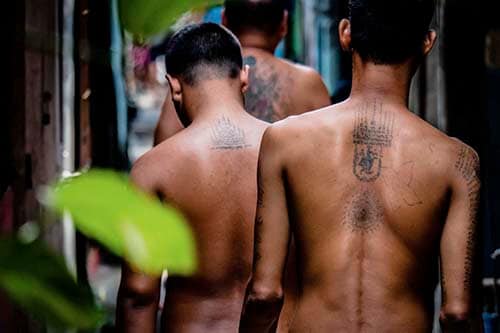 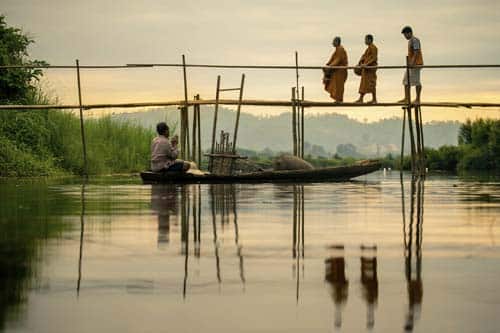 Today we start our two-day river trip down the Mekong River. The Mekong forms the border with Laos. On a traditional boat we will set sail for an authentic rather than luxurious experience. We’ll float silently through lush Laotian jungle and visit several villages inhabited by various local tribes along the way. Late in the day, we will arrive in the small town of Pak Beng, on the river bank, which nestles up to a hilly slope. Here we stay in a simple hotel and get the chance to experience life as it is lived by most of the Lao population. 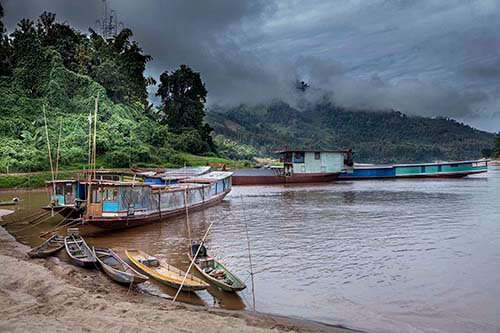 At dawn we may see the local forest workers arriving at Mekong River with their elephants. Here, the elephants drink and wash themselves before a long day in the jungle. Steep hillsides and dense jungles await us on today’s sailing. On our way we dock at the Pak Ou caves where some of Laos’s most important cultural treasures are found in the form of thousands of ancient Buddha statues collected from across the country for centuries. In the evening we arrive in Luang Prabang – Laos’ second largest city, which is included on UNESCO’s list of cultural heritage sites. 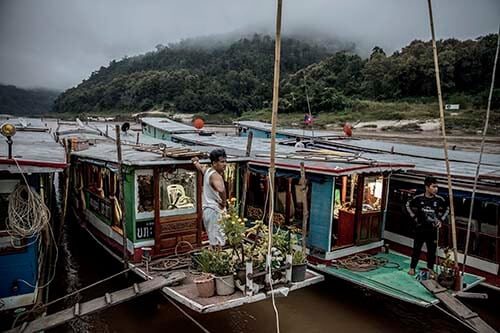 We have two busy days in front of us. The focus will lie on street photography, portraits of local monks at dawn as well as the many sights that hide behind the city’s facades. We will of course visit the lavish temples of Wat Sensoukarahm, with their ruby red and gold facade and Wat Xieng Thong, where gold decorations adorn every wall, pillar and door. We will also have the opportunity to explore the unique landscape around Kuang Si Waterfall. 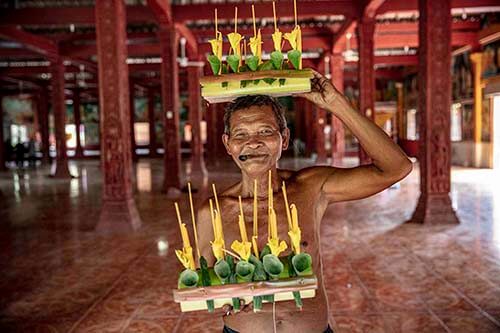 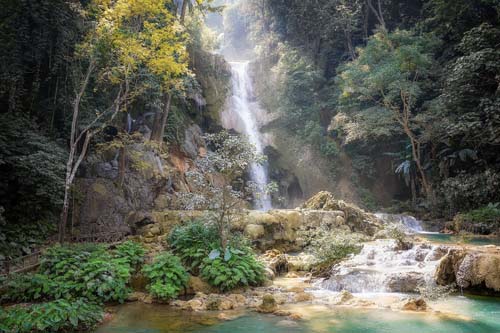 From Luang Prabang we fly to Cambodia. Our base for the next couple of days will be Siem Reap, a resort town in northwestern CambodiaSiam Reap is the gateway to the ruins of the magnificent Angkor Wat temples, the seat of the Khmer kingdom from the 9th–15th centuries.

We will enjoy a quiet evening in Siem Reap, find a cozy local restaurant for dinner, and recharge our creative batteries for the next two days which will be very unique. 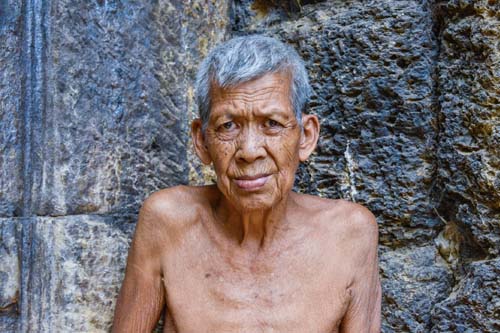 The Angkor Wat is one of the largest of many temples that are sited in the area, however, it has given its name to the whole area. Angkor Wat is one of the buildings that continue to astound visitors, and leaves no doubt that the Khmer Empire had a magnificent past.In the first rays of the sun, we will arrive at the legendary buildings enclosed byrainforest – a magnificent day begins. Welcome to Angkor Wat – you better brought enough batteries and SD cards with you.

The old city center is now a ruined city surrounded by a square, with eight-meter high walls. After passing the entrance gate flanked by impressive elephants, we move into the Bayon Temple, located in the exact center of the city. We will look for the best angles and light to take photos of the fascinating architecture.

Moreover, we will visit local monasteries where the monks work in the classrooms and we will follow some of them, on their way through the historic buildings. Their orange robes provide a stunning contrast to the green shade of the ruins and rainforest and allow for some great photography. 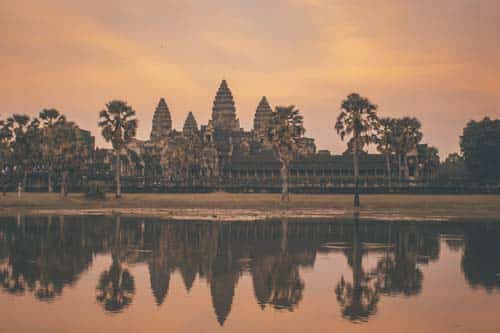 Another exciting and exceptional day awaits. Today, we will visit Beng Mealea, a temple located 40km away from Angkor Wat.

The temple can not be accurately dated, and its exact history is unknown, but it was originally built as a Hindu temple, which is reflected in the extensive carvings with scenes from Hindu mythology. Beng Mealea is not as extensive as Angkor Wat and not nearly as well-known or visited by tourists. The ruin is much rougher and overgrown. It invites you to walk, climb and explore the jungle surroundings with your camera.

We set off to the Cambodian capital, Phnom Penh. Today, you will have plenty of oportunities for travel, portrait and street photography.

On the way we stop at a town called Spider Ville, where the local specialty is fried spiders of considerable size. You are welcome to give them a try – or you can just immerse yourself in photographing this peculiar place.

We will then approach the watery side of Phnom Penh, to board a wooden boat that will sail us along the final stretch of the Mekong River.

Along the way, we will visit a village where we get insight into the production of the soft fabrics ranging from silk butterflies and cocoons to weaving silk. We also pass a floating village where life is lived on the river itself. Part of the village houses stand on stilts in the water, and residents travel around in small boats.

Tonight, we will already have our farewell dinner as we will return to Bangkok the next day. 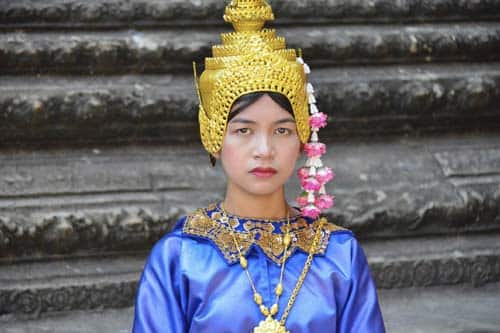 DAY 10: THE KILLING FIELD AND RETURN TO BANGKOK

At dawn we will drive to The Killing Fields, an important – and sad – sight which is witness to the Cambodia’s violent past.After lunch, we will fly back to Bangkok. From here you can either can catch a flight back home or we can help you arrange for an extension of your stay.

Enjoy our workshop catalog with stunning photos by Christian Nørgaard 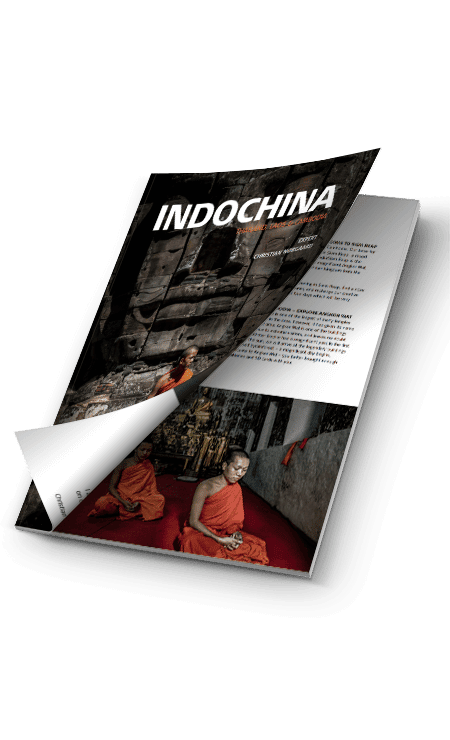 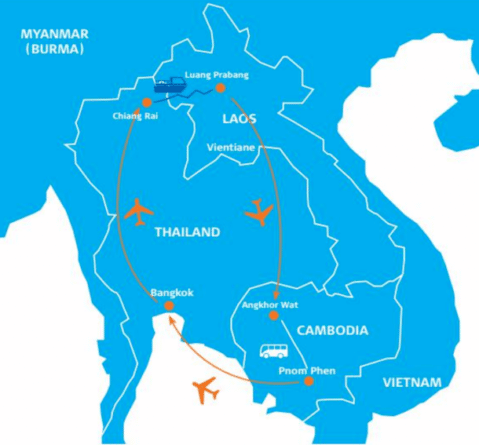 All visitors are required to have a passport valid for at least six months beyond the intended stay, and all visitors will need a visa. Most nationalities can enter on a tourist visa, but contact and confirm with your local embassy to be sure.

The average temperature in our region of travel is around 25°C.

The official language of Thailand is Central Thai, of Laos it is Lao and of Cambodia it is Khmer though French is still used in many of its cultural institutions.Most can also communicate in English.

QUICK GUIDE
Bangkok and Phnom Penh are fascinating, exciting and incredible capitals that never go to sleep. There are many sights to visit, here is a selection: