Explore the land of the happiest people in the world – the secluded Kingdom of Bhutan nestled in the foothills of the Himalayas. Let us take you on a photographic journey of the contrast between bustling city streets and ancient monasteries, lush landscapes and the majestic Himalayas, vast rice terraces and fields of drying chili peppers laid out like an Impressionist painting. Bhutan is truly a feast for the eyes. 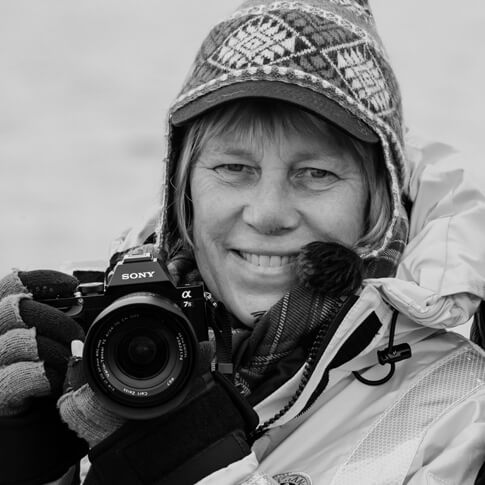 Sisse Brimberg is a highly experienced photographer who, during her long career with National Geographic, has photographed over fifty stories for National Geographic Magazine and National Geographic Traveler. She has covered a variety of stories, ranging from a feature on living in the Art Deco city of Casablanca, to the wilderness of Antarctica. Through the large variety of subjects, the red thread running through her career is that Sisse is a true expert in the art of visual storytelling. Sisse has a keen ability to use the camera to discover the many different layers of a place, and then pull them together in a visual narrative. She is an award-winning photographer who has received acclaim from Pictures of the Year International, the National Press Photographers Association, and Communication Arts. Sisse’s work continues to be exhibited around the world, including at the prestigious Leica House in Germany, followed with a cover story at LFI Magazine.

For the past 15 years Sisse Brimberg has spent part of the year travelling to remote and exotic locations teaching photography. She has also worked closely with Better Moments on our exclusive photo workshop program to Morocco, Tibet and Nepal, some of the most desirable regions to visit today for photographers and film makers. As a Bhutan expert, Sisse is excited to share her experiences with you and show you this very unique place and introduce you to the happiest people in the world.

In her webinar, Sisse Brimberg shares her best shots and tales from Bhutan and talks about our previous and future photo workshops in the Land of the Thunder Dragon.

DAY 1: ARRIVAL AND A SCENIC RIDE TO THIMPHU

Our adventure begins when we meet at Bhutan International Airport. We will start our journey towards the Bhutanese capital of Thimphu. Along this scenic route, there will be opportunities for both landscape and portrait photography. Upon arrival, we will check in to our hotel, and then will spend the rest of the day exploring Thimphu and its bustling, colorful street life. After dinner, we will have the opportunity to discuss today’s images, and Sisse Brimberg will give a presentation focusing on the key elements and skills you can use to make your photography practice the best it can be.

DAY 2: THIMPHU – WHERE TRADITION AND MODERNITY MEET
Today, we are in Thimphu, where tradition and modernity meet. You will have the opportunity to apply some of the techniques that you learned about in Sisse’s presentation the night before. Thimphu is a fascinating place that defies expectations of a capital city. Here, you will only find low-rise buildings, very little automobile traffic, and a beautiful vegetable market. Don’t let the lack of traffic fool you: There is a vibrant street life in Thimphu that will provide wonderful backdrops, and the Bhutanese people are very open and friendly. No wonder they are the happiest people on Earth.
DAY 3: ADMIRING THE HIMALAYA MOUNTAINS & BHUTAN’S OLDEST TEMPLE

We leave Thimphu and board our 4×4 bus in the morning which will take us through the lush valley to the surrounding countryside with several photo stops along the way. From here, we will have magnificent views of the Himalaya Mountains, the tallest mountain range in the world. In the city of Punakha, we will visit one of the country’s most impressive monasteries, the Punakha Dzong, located in between two rivers. It dates from the 16th century. The brightly colored dzong is a vibrant place, and we will see the monks milling around with the worshippers. This makes for exciting photography. Afterwards, we will cross Bhutan’s longest suspension bridge (100 m) which is only accessible by foot, and explore how to capture the shifting evening light. After dinner, Sisse Brimberg will present on her experience as a National Geographic photographer.

Today, we will have the rare opportunity to spend the day with locals to learn more about the Bhutanese culture and traditions. We are invited to take part in a home-cooked meal with a local family. We will have the chance to photograph the preparation and cooking in a classic Bhutanese kitchen. This is followed by a visit to a traditional Bhutenese bath, prepared by heating rocks on a fire, filling a sunken wooden tub with water, and heating the water by placing the hot rocks in the tub. As archery is the national sport of Bhutan, and a great possibility for taking dramatic photos, we’ll watch one of the local teams practicing later on. If time allows, Sisse will be available for one-on-one guidance.

Today, we set out early and head towards Paro, passing through breathtaking landscapes with several photography stops along the way. In the afternoon, we have the chance to visit Rinpung Dzong in Paro, a massive construction which stands on the hillside overlooking the valley of Paro. This dzong is unique because it plays both civic and religious roles.

DAY 6: PARO – MEET THE MONKS
In Paro, you have the chance to experience street life Bhutan-style, with lots of handicrafts, vibrant murals and the recently-harvested chili peppers hanging in strands from windows all over the city. You will also have the chance to photograph monks at Kyichu Lhakhang, Bhutan’s oldest temple. The intricately decorated dzong provides incredible backdrops for portrait photography. After dinner at the hotel, we will enjoy a relaxing evening where Sisse will be happy to look through some of your photographs and give you pointers.
DAY 7: TIGER’S NEST – A MONASTERY NESTLED INTO A CLIFF
After breakfast, we will drive up to Ramthangka (10 km from Paro). From here, we will (slowly) walk up to the famous Tiger’s Nest monastery, the sacred Buddhist temple and UNESCO World Heritage site which literally hangs on a ledge overlooking the Paro Valley. Along the walk up to Tiger’s Nest, there are ample photographic opportunities, with pilgrims passing by, prayer flags billowing in the wind, and magnificent views of the valley. We will have a farewell dinner at the hotel celebrating our adventures in the beautiful, rugged Bhutan.
DAY 8: DEPARTURE
We leave Bhutan and fly home.

Enjoy your 34-page catalog with stunning photos from Bhutan 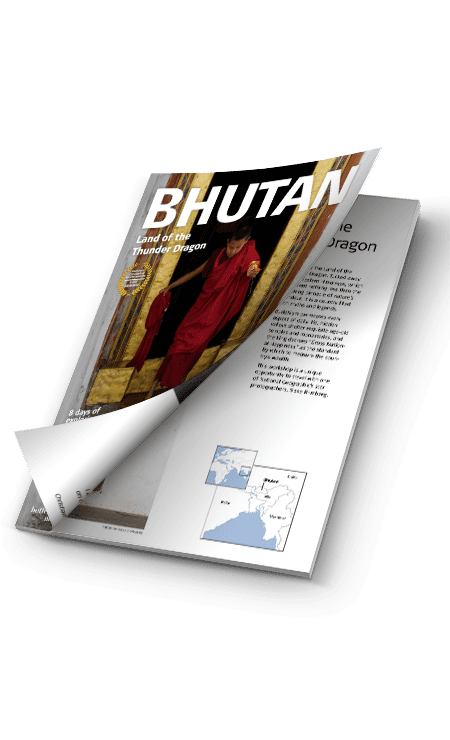 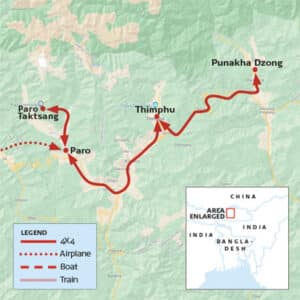 Paro Airport is the only international airport in Bhutan. The airport is located 6 km from Paro in a deep valley on the bank of the river Paro Chhu at an elevation of 2,200 m. Druk Air, the Royal Bhutan Airline, is the national airline of the Kingdom of Bhutan. The schedule changes by season, but normally there are three flights per week from New Delhi and a daily flight from Bangkok.

The climate varies widely depending on the elevation. In the southern border areas, it is tropical; at the other extreme, in the high Himalayan regions, there is perpetual snow. In Paro the temperature ranges from -5°C in January to 30°C in July, with 800mm of rain.
The ideal time for trekking and for traveling throughout the country is autumn, from late September to late November, when skies are generally clear and the high mountain peaks rise to a vivid blue sky.

Dzongkha is the official language. English has been the language of education since 1964, but there is growing emphasis on learning Dzongkha to strengthen national identity.

The Bhutanese monetary unit is the Ngultrum (BTN)